Candles and Cauldrons And Witches, Oh My!

If it’s been a while since you’ve checked in with Sundae Comics, you might be wondering why my comics have looked a little different these past couple of months. Who is Iris the witch and why is Hettie the raven so upset and what’s the deal with the little girl that thinks she’s a bird?

tl;dr: I decided to participate in Inktober this year and accidentally created a new comic series.

It wasn’t my intention to create an ongoing story. In fact, when I first started thinking I might want to participate in Inktober this year, it occurred to me that it might be fun to not only challenge myself to create a batch of comics based on the month’s word prompts (a difficult enough challenge on its own), but to try to connect them together into a story. But then I came to my senses. I realized that trying to create an ongoing story out of Inktober prompts was an absolutely insane idea and that I should just stick to making simple, funny comics about monsters and superheroes and whatnot and absolutely avoid any form of continuity whatsoever.

And then I went and did it anyway.

Again, it wasn’t on purpose. On the first day of Inktober, I just happened to make a comic that got a lot of attention and positive feedback on Instagram. And it just happened to be about a witch. And so when I started work on the next comic and I immediately had an idea for another witch comic… I just sort of went with it. And when that comic also proved to be popular… Things quickly got out of hand.

I have now made nineteen comics about the witch Iris Bloom, her niece Sunflower Daffodil, Hettie the raven, and Gardenia the cat, and I have at least ten more comics to go before their current adventure comes to an end. The story is much more gentle and wholesome than anything I ever thought I might write, but the support and enthusiasm from readers has made the comics an absolute joy to work on.

If you are interested in learning more about this new world of witches and magic and angry birds, you can find their adventures as a guest feature hosted on Sundae Comics and, as always, on my Instagram.

I’m excited to announce the launch of my new online store! I’m selling signed Sundae Comics art prints along with greeting cards, stickers, and other fun stuff. Visit nathanolsen.art/store to check it out.

This new store is an important step for me. While Sundae Comics is a labor of love, I cannot do it indefinitely without an income stream. If you are a fan of my work, I strongly urge you to check out the store and consider making a purchase. The proceeds from each sale will help me pay for art materials, computer equipment and software, and mission-critical supplies like coffee and… MOAR COFFEE.

Months of planning and work have gone into launching this store. It’s really important to me that the items I sell are of the highest quality that I can make them, so I’ve put a lot of research into everything from the ink and paper stock I’m using for prints and greeting cards to the chipboard envelopes, plastic sleeves and backing boards I’m using for shipping.

I’ve also put a substantial amount of time into retouching and recoloring many of the comics to get them ready for print. Since I try to stick to a weekly deadline with Sundae Comics, I often have to make compromises to stay on schedule. As coloring is one of the last steps in finishing a comic, I’m not always able to put as much time into that step as I would like. So the additional work I’ve put into the art prints and merch has allowed me to more fully realize my original vision for some of these comics. I’ve been really pleased with the results and am confident that anyone who makes a purchase in my store will be really happy with the quality of the products they receive.

Stock and selection in the store are currently limited, but I plan to continue to grow the store over the coming months. If you have any suggestions for products or are interested in purchasing a print of a comic that you do not see in the store, please let me know.

Thank you all for your continued support!

Sundae Comics will be moving away from its weekly publishing schedule for the next several months. There will still be new comics — in fact, there will be a new comic next week. But a more leisurely schedule will allow me some much needed time to enjoy some sunshine and fresh air.

Moving away from the weekly publishing schedule will also hopefully allow me to focus on a few other comics-related projects that I’ve wanted to put some time towards. For instance, some of you may remember that I was excited about the new paints I bought a few months back — I would like to put some of my time this summer towards becoming a better painter. I also have a few writing projects that I would like to take a crack at — if any of these bear fruit, I may introduce serialized storylines in Sundae Comics. And last but not least, I’m in the process of building an online store and would like to get that launched as soon as I can.

Thank you all who have reached out with a friendly DM or comment and expressed your enthusiasm for my comics. Your support has meant a lot to me. I know it’s probably a bummer to hear that there will be fewer comics this summer, but prioritizing my mental and physical health will help ensure that there are many more stories and comics in the future. Stay tuned! 🌞 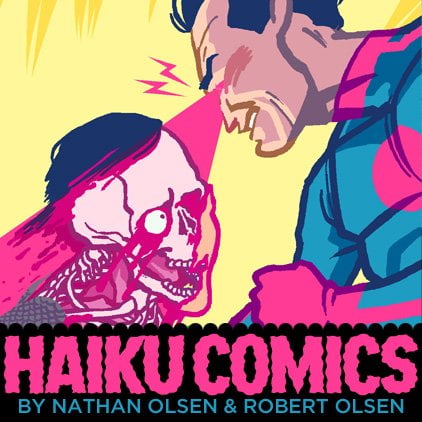